When you don’t like the thought of doing something, here’s how to ‘just do it’ 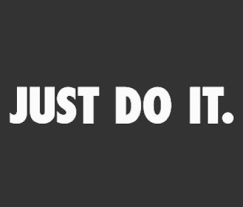 My 8-year-old son Alex is right into skateboarding. On Tuesday’s we head to a skate park after school. Today he spent a solid hour on two small ramps, practicing balancing his weight distribution to go up and down over each ramp. Watching him do the same thing over and over again, with a few falls in between, I was reminded of the simple fact that improving in anything involves practice and persistence. Progress only happens in action – you can’t be on the grandstand, you have to be on the court (or, in Alex’s case, on the ramp).

When we’re enjoying something, and feel like we’re succeeding, applying ourselves becomes easier.

On the flipside, we put things off we don’t like the thought of, even if we know we need to do them.

It’s not the mountain we conquer, but ourselves – Sir Edmund Hillary

As Tony Robbins says, we will do more to avoid the pain (of the thing we don’t like the thought of) than we will to gain the pleasure of accomplishing it.

Is there something you’re putting off right now? Like, for example, a tough conversation, initiating a new project, or time for planning?

Here are a couple of tell-tale signs you’re holding back:

Email is a great procrastination strategy. Tina prided herself on managing her inbox so fastidiously to keep on top her busyness, however it was at the expense of other more important project work. Why do we do that? Because clearing emails from our inbox gives us a sense of progress, even if it’s not the progress we should be making, which makes us feel good.

Checking our social media feed gives us a shot of variety with the same feel good boost. We’re very self-serving. We don’t do anything that doesn’t give us a payoff of some kind, which is why the habit of ‘feel good’ instant gratification keeps repeating.

What to do instead: Set up your day, as much as you can, to do the important things first. Allocate time in your day for email and don’t get distracted by your inbox or social media feed.

We all feel overwhelm sometimes. It’s when we get stuck in it that’s the problem. Getting our head around things that are hard can be tricky, especially when our thinking becomes scattered and jumbled. We lose sight of how we can move forward. Feeling overwhelmed by the enormity of it all, we don’t start because we’re not sure of what do to how to do it.

What to do instead: Chunk your thinking down and decide on the first step. Do something that moves you forward, even if you’re not sure it’s the right thing. Once you’ve taken the first step, then focus on the next and so on. Progress is made one step at a time. You don’t need the full plan to take the first step.

Excuses around time, money, people and the weather are some of the more common ones. While the reason might be valid, excuses are often just convenient beliefs to justify not doing something. A decision not to act is still a decision.

What to do instead:  Being aware of your excuses is the staring point. Rather than buying into the excuse, decide to take personal accountability instead. In other words, don’t let yourself off the hook. Seeking the help of others who can support you and help hold you accountable can make a big difference too.

We put things off because of fear, for example, fear of not getting it right, being rejected or whatever the fear is. Putting things off won’t make the fear go away. Wishing, hoping and waiting for things to change is not empowering you at all. When you don’t like the thought of doing something you need to do – just do it! Action will always kill inaction. Taking responsibility is your choice and it’s the key to not letting yourself get in your own way.